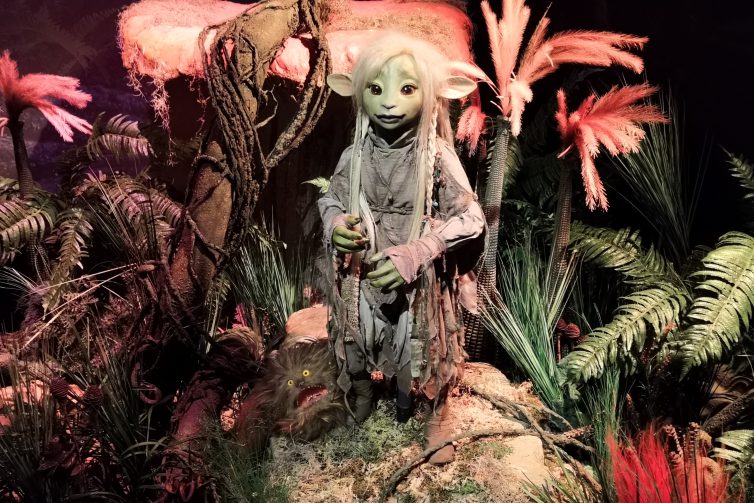 This summer we went to this exhibition of Netflix here in London. The Dark Crystal: Age of Resistance. The series came out on the 30th of August. Via Eventbrite, I came across this exhibition, which was held in one of the cinemas near the Southbank. Surprisingly it was a fun experience to preview what this series is about before it was aired on Netflix.

We were simply swept away by the world of Thra, where the Gelflings lives under the rules of the Skeksis. The story starts a bit dark and sad with those dreadful Skeksis, but don’t worry, the adventures of the lovely Gelflings will make it all up and it will make the story much brighter. No spoiler alerts here!

Somehow the puppets remind me of the Efteling in the Netherlands, which is an enchanted amusement park with elves, puppets and other fantasy creatures. Do you agree, Dutchies among us?

If you haven’t seen it by now, go see it and fall in love with the Gelflings and Podlings in the world of Thra. It is an excellent fantasy adventure series completely made with puppets and animation.

The series is based on the film that came out in 1982 – The Dark Crystal by Jim Henson. I had to watch the film as well, not sure why I didn’t see this one before. I think it hasn’t been aired in the Netherlands in the 80’s or 90’s. Or I just missed it somehow.

I can’t wait to see season two of the series. Hopefully, it will be out next year.

Below some pictures, I took from the exhibition where we were invited for dinner with the Skeksis. Disclaimer: I didn’t know back then that they are the mean guys 😀

I always love to travel, meeting different cultures, art and lots of other new exciting things in life. Blogging about those things makes me feel grateful. Best part is making wonderful memories into something permanent that hopefully inspires someone in anyway.❤
Read more

2019 has been a rough year full of experiences for

Almost end of the year and just wanted to end 2019